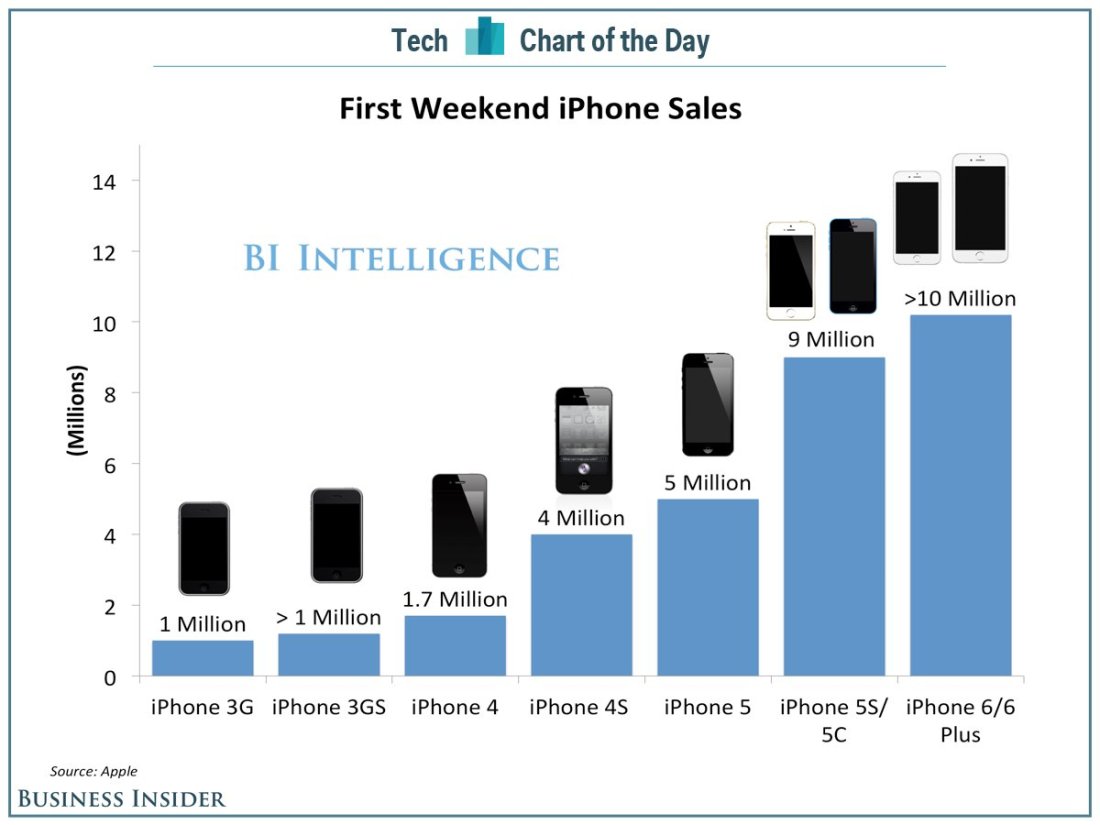 No wonder they’re sold out everywhere I try? I guess a little patience is in order.

It’s not often that Ms. D suggests that we head to the Apple Store… but that’s what we did on Saturday after stopping by Latinfest to throw JFP t-shirts to the crowd.

Why? She wanted to see the iPhone 6 and 6 Plus and decide which one she’s leaning toward — spoiler alert — she’s thinking 6 Plus.

That surprises me a little because I’ve never thought of Ms. D as the “phablet” type (and, quite frankly, I’m fairly certain she’ll never use that word). Still, it makes sense — she hauls her iPhone around in a purse most of the time and won’t feel the size is an encumbrance; what she will enjoy is the full glory of her social media — particularly Instagram — on the 5.5″ screen. And reading magazine stories (something she does for a living as well as for a pastime) should be that much more enjoyable, especially considering she and I are both upgrading from iPhone 4s.

END_OF_DOCUMENT_TOKEN_TO_BE_REPLACED

Lefties Are Not Happy About The Apple Watch (h/t Buzzfeed).

This was the first thought I had when I saw the thing about using the crown to control it. (Silly me thought a “crown” was more of a bezel that went all the way around the watch. Like a diver’s watch or something.)

Now I’m thinking — that just won’t work! I’m left-handed, and I wear my watch on my right hand. If I ever have to use a “crown” I have to first take the watch off and hold it in order to change the date or wind it whatever.

Bezel would have been cooler.

Talk about impractical; and probably a lot of fun to mess with…

Link of the Week >> Not All Airport Extremes Are Created Equal

With a sudden onslaught of interns and recent college grads at the JFP, I’m finding our one sad little wireless hotspot — a Belkin router that seems limited to 802.11g speeds — is cramping everyone’s style.

Not only are our wireless connections running slowly (in particularly the MacBook Airs in the office that have not Ethernet alternative), but every once in a while the router just gives up and I’ve got to go restart it.

So, I decided it was time to upgrade. And while I had my heart set on a Apple router, the price tag can scare anyone who (a.) has taken a fleeting glance at third-party routers on Amazon and (b.) can do math.

The story linked above was very helpful in encouraging me to believe that we could get away with a fourth generation Airport Extreme router, which I just bought from eBay for $50 shipped. I’ll post an updated once it’s unpacked and in the office, but I’m already looking forward to the dual antennas and “guest” access mode.

Just came across this cool image at the Onswipe blog that shows Twitter use by platform, showing that at least as far as Twitter users are concerned, NYC is something of an iPhone town. Check it out here: New York City is iPhone City According to This Image – Onswipe Sage | Onswipe Sage.

When Ms. D’s laptop got a bath of water a few weeks ago in a coffee shop, I got the feeling an emergency Mac switcheroo was afoot; it turned out that the MacBook was lost to water damage and the drive salvageable; so while her 2009 aluminum MacBook’s brain got a temporary reprieve in a 2007 MacBook’s shell, it was clear that she would need a more permanent upgrade.

My typical M.O. is to upgrade me and then give her my machine, and she was all for it for a number of reasons:

My goal, as usual, was to get something… different. My MacBook Air has been a constant companion for well over a year with nary a complain, but I’ve been eager to try an 11-inch model for sheer portability on sales calls and presentations. Plus, the 2010 was starting to stagger a big under my inevitable load of open windows.

But moving to an 11-inch MacBook Air — and keeping within my budget — was going to mean a smaller SSD; the 11-inch does offer a 256GB, but only in the latest models, meaning more expensive. (I never buy new Macs — sorry Apple. Thanks to making the used ones so great!)

I had to move quickly in this emergency search but found a nice match on eBay within the budget — a 2012 model with 4GB RAM, a faster 128GB SSD, not to mention USB 3.0 and faster graphics than I was accustomed to.

END_OF_DOCUMENT_TOKEN_TO_BE_REPLACED

If you’re like me, you use a lot of web applications — stuff like Gmail, iCloud, Soundcloud, Pandora, Basecamp etc. For running our newspaper company I’ve got business applications such as Ace of Sales, Magazine Manager, Google Analytics and Constant Contact that run in a browser window and that I’m using all the time.

And what’s the most annoying thing about running so many applications in browser windows? Finding the app’s window when you need it.

Enter Fluid for Mac. If you’ve never heard of Fluid, this might be your favorite blog post of all time.

END_OF_DOCUMENT_TOKEN_TO_BE_REPLACED

It’s been driving me nuts that Apple removed the Save As command from Pages and other Apple apps; a huge mistake in my opinion, particularly because I’m used to the idea of editing a file (say, a contract that I’m using for advertising) and doing a quick Save As; I *never* remember to duplicate ahead of time.

But I hadn’t bothered to Google it until today; and I immediately found a pleasing answer via TUAW. It turns out it’s not a Pages thing, but an OS thing (which makes sense) and the Save As command has been returned in 10.8 and higher; it’s just hidden.

Open the File menu in Pages, Numbers or another Apple app that’s missing the Save As menu and then press Option; the Duplicate command changes to a Save As command: