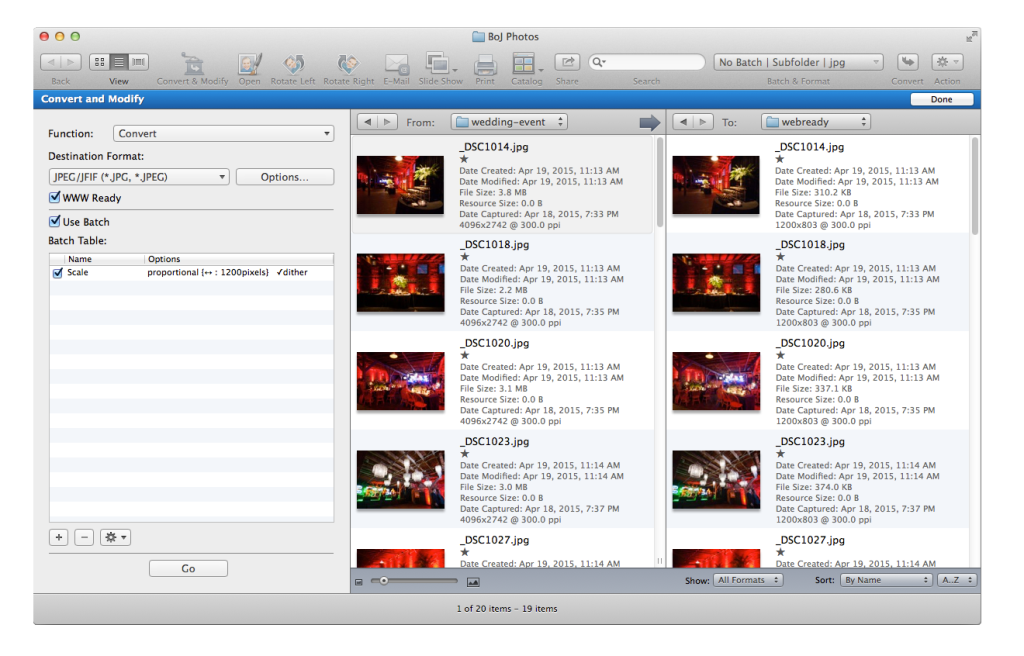 Recently I’ve come across a few Mac folks (creatives, designer types) who surprised me by not being aware of GraphicConverter, which is my go-to application for most anything, well, graphic-y.

I’m not much of a PhotoShop maven; if you’re knee deep in Adobe products, then GraphicConverter might not be super-relevant to you. But for the rest of us, GraphicConverter is a very convenient way to translate images between formats, change image sizes, add background colors—even create illustrations, Web ads and other items from scratch.

I deal with a lot of images for the Web—as publisher of a local weekly newspaper and website, I’m often posting ads for the web or creating small images for a variety of adverting, marketing and sometimes editorial purposes.

And here’s the thing—lots of stuff comes in the wrong format. People sends PDFs for the Web; they send CMYK files when they need to send RGB; things are sized 2-3 times larger than they’re supposed to be; files come in too big (filesize-wise) for posting to our CMS.

For some of these things, I use Apple Preview—especially a quick crop or to save a file into a JPG; but even those tasks are often better done in GraphicConverter, particularly if you don’t know the source of an image and you need to check some things out.

So what can GraphicConverter do?

Basic photo editing and manipulation. Cropping, resizing, setting a transparent color, and retouching photos—GraphicConverter’s got tons of tools for these tasks, and they’re pretty straightforward to use. (I actually spend very little time with the filters and effects—there are some great ones, like the Depth of Field filter. I should play with that more.) I find that just having access to the Auto Levels feature is handy, and it’s got simple sliders for brightness, contrast, saturation, etc.

File format conversions. Clearly this is where GraphicConverter got its name, and there’s very little you can throw at it that it can’t handle. Preview actually does a little better with some native PDF and PostScript-type stuff, but I find GraphicConverter handy for pretty much anything else, from crazy old PC image formats to tools for troubleshooting more modern stuff for the Web. For instance, color spaces—people too often send Web images that they’ve accidentally left in a CMYK space… something you can see in a glance in GC.

Batch conversions. This is probably what I use GraphicConverter for most frequently.

Problem: Pro Photographer has nice camera, therefore-must-shoot images that are like 40,000 pixels wide. (I kid. A little.)

Solution: Make photos like 800 pixels wide for use in a Web gallery. (That’s what you’re seeing on the main photo at the top of this story.) GC can change the size of the photos, knock them down to JPEG and do all sorts of manipulations automatically and to a whole folder of images at once. Love it.

Basic words on images. I’m not much of a designer, but occasionally someone needs something done quickly for a Web banner ad or a quick logo or similar image; GraphicConverter gives me the ability to toss something together relatively easily—and, in some cases, make changes to existing stuff that simply need a quick edit so it can get out the door.

Image Browsing. It takes a reasonably fast machine, but GraphicConverter offers a built-in ability to browse your drive, connected removables or network drives and take a look at the photos and media you find on there. One fun option I just noticed—easy access to browsing your DropBox. Who knew?

Out of the browsing interface you can quick view, convert images, rotate them, print, e-mail, or even set a slide show running on a given folders images and media.

I’m sure this barely scratches the surface of what GraphicConverter is capable of but, given my own limitations, I’m sure there’s plenty I just don’t understand.

Still, as someone who has been dealing with images on a Mac for over 20 years—and using GraphicConverter for a long chunk of that time to manipulate and translate photos, prep screenshots for publications and do so much more than that for publications and online sites of all kinds—I’ve got to say that I’ve returned to GC over and over as a workhorse for dealing with photo file translation, manipulation and creation.

I tried other tools—GIMP, Photoshop itself, Lightroom—and while I’m sure they have their advantages, for my purposes, I just keep coming back to GC. If you haven’t encountered it before, give it a spin.